A team of archaeologists recently unearthed the remains of a female hunter in the Andes. Our Hunt-Fish editor finds solidarity, clarity, and community with this 9,000-year-old outdoorswoman.

Dear hunter, I write to you for two reasons.

First, I’d like to honor your long-ago life as a part of the ancient tradition in which I have chosen to steep myself. And second, I find it important to examine this community of hunters of which we both find ourselves a part.

A Life Unearthed, a Pattern Revealed

We present-day humans uncovered your remains at 13,000 feet in the Peruvian Andes. By “we,” I specifically mean archaeologists.

As UC–Davis archaeologist Randall Haas and his team removed dirt and debris from your ancient burial ground in Wilamaya Patjxa, the researchers remarked on what a great chief and important man you must have been, under the assumption your sex was male.

More than 20 projectile points and blades were buried neatly alongside your slender bones. It was reminiscent of burials of great hunters found before you.

But seeing the nature of your skeletal remains, a bioarchaeologist named Jim Watson remarked he thought you may be female. And, indeed you were — a 17- to 19-year-old female, to be precise.

The researchers were not, in fact, intending to study any sort of ancient gender parity in hunting. But when presented with the remnants of your young life, they were behooved.

Because of this, 107 other early-Holocene and Pleistocene burial sites were subsequently sexed. In all, 27 hunters were found in those burial sites, 16 of them being men, and 11 — like you and me — were women.

I learned of your existence while I too was on the hunt. I, a modern-day woman clad in neutral solids and camouflage, holding a .308 rifle and bedecked in blaze-orange — with tags in my pocket and hope in my heart. I was hunting a landscape where mammoths, giant sloths, short-faced bears, and an American savannah of animals strange to me would have roamed during your lifetime.

I was in pursuit of a living relic of that same late-Pleistocene and early-Holocene era in which you hunted vicuña and deer in Peru. Here, that creature is called a pronghorn. It’s the last of its Linnean family, the antilocapridae; its closest relatives these days are the African continent’s giraffe and okapi.

Both swift and birdlike, pronghorn are most often found in a herd, one that tends toward matriarchal hierarchies. When any small threat is perceived, they spin their collective legs against the prairie ground like nothing you’ve seen before.

Certainly, your hunting prowess with your ancient tools would be impressive in any context, but I’m sure you’d have mastered the art of hunting such a creature, both by necessity and by the singular focus of survival.

For me, hunting is a grappling for a simpler connection beyond the many advances of our modern world. It’s a reckoning to gain even a small understanding of this very old ground beneath my feet and its ties back to the wildlife that still roams the spaces we’ve managed to hold onto — for now.

Sisterhood and Brotherhood, Together 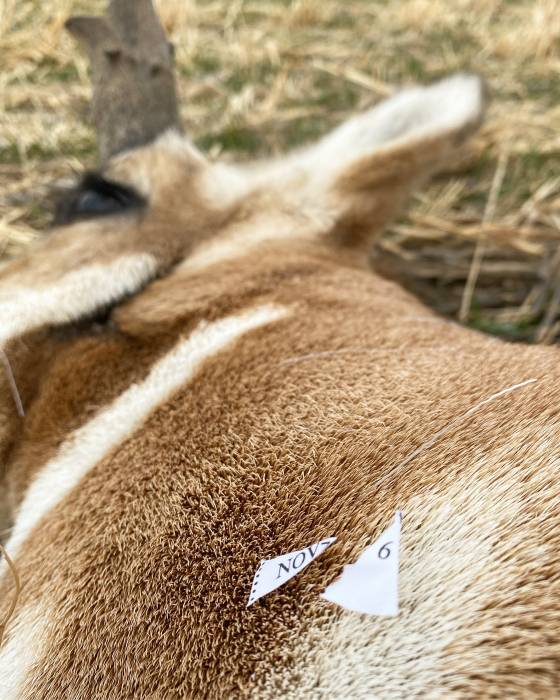 We’re different in that respect, you and me. My survival is not dependent on my hunting skillset, and thankfully so. But when I read about you, while on the sage-covered plains of eastern Montana, I felt bolstered by your existence. And, in equal measure, by the respect with which your subsistence community chose to honor you.

I too have communed with both sisters and brothers in the hunt. Together, we’ve traded knowledge, stories, adventures, and meals around fires. We’ve shared tents, vehicles, and the moments of blood, muscle, and physical strain that success in this endeavor provides.

When I took the shot on my pronghorn buck at midday last Friday — a shot that quickly took his breath and his life — I was alone, save the nearly 100 pronghorn surrounding me. I’d covered hundreds of yards by foot and crawled to get within distance.

The herd grazed in my direction, on a whim of both kinds of luck: good for me, bad for that lone buck. The wind never betrayed me; I stayed still as stone.

They wandered within 40 yards after slowly advancing more than 100 — I was certain they’d bust me — but the shot opportunity finally happened. And, because of modern technology, I was able to immediately share in this success with my hunting family, my brothers and sisters in the pursuit.

Because of you, researchers are shifting their opinions on who may have been big-game hunters in the societies of your day. They have begun to toss out the “man-the-hunter” hypothesis and make room for one that’s more communal, more wholly human.

From the current numbers of the study, in which your burial ground was turned over, it’s estimated that perhaps 30-50% of early-Holocene and late-Pleistocene hunters were women. Of course, it’s up for debate. It’s hard to unseat old ways of thinking without vast amounts of data. And even then, data certainly doesn’t seem to matter to some.

But I don’t find these numbers all that surprising. Today, the number of women hunting in the United States slowly arcs upwards, and it’s now edging closer to the ancient lower threshold of 30%.

Today, women hunt alongside their fathers and mothers, their husbands, their daughters and sons, their friends, partners, and occasionally — as you might have and as I often do — alone.

A Hunter’s Legacy to Lean On

You were young when your lifeless body was respectfully adorned with the hunting instruments of your time. And yet, your legacy lives on nearly 9,000 years later.

I thought of you as I skinned out and broke down this relic of your era, as I stacked meat in my coolers, and as I drove at speeds much faster than a pronghorn toward my home in a small city.

Even when I hunt alone, I hunt as part of a community that seems to defy gender rather than depend on it. So many from all walks of life have imparted knowledge, shared skills, pointed out better ways, schooled me with hard-won lessons, and spun stories of exuberance and success that pushed me onward.

But you were the reminder that this act I partake in is as ancient in its femininity as it is in its masculinity. It’s as human and gender-neutral as anything can be. No barriers are being broken; there were no real barriers all along.

You were a hunter, and so am I. When my eyes rest on the skull of the pronghorn I now hold, I will think of and honor you for this simple treasure of understanding.

Thanks for this gift, given so many years beyond your too-short existence on this planet.