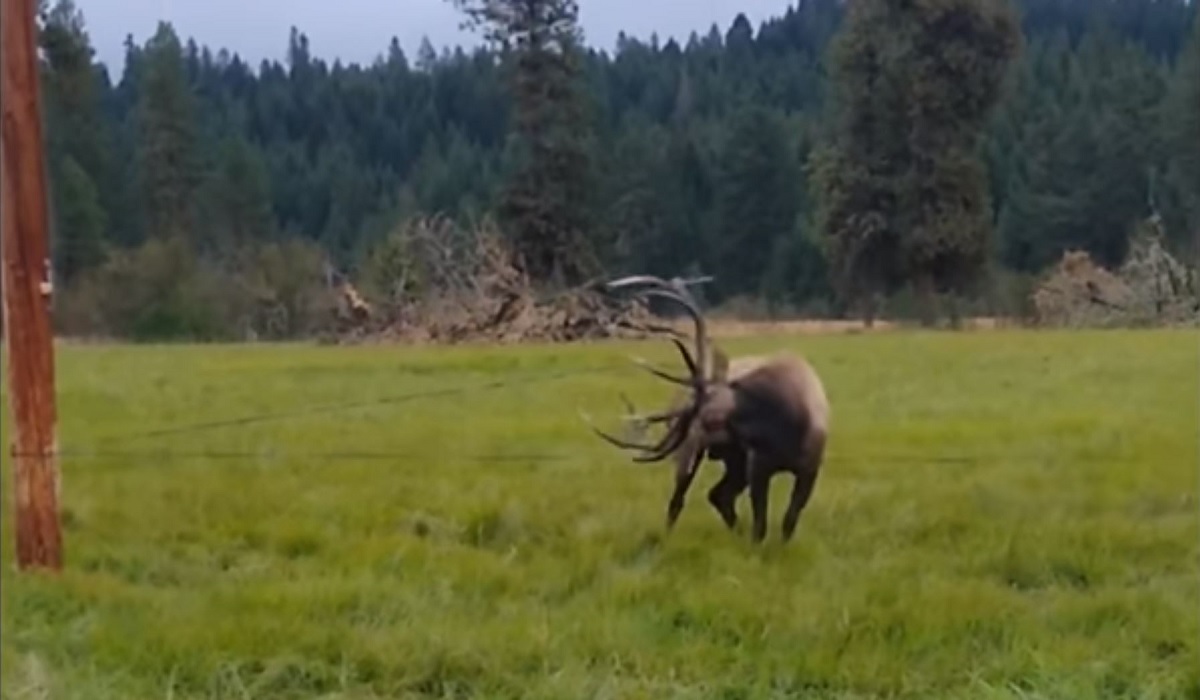 A big bull elk in southern Oregon found itself in quite a dilemma when its antlers got tangled in some downed power lines, and had to be rescued by some fast thinking officials from the Oregon Department of Fish and Wildlife (ODFW).

According to the Oregon State Police, a caretaker from a ranch in Butte Falls found the elk frantically pulling and thrashing its antlers in an attempt to free itself. After calling the police and explaining the situation, the Pacific Power company disabled the electricity, allowing someone from ODFW to tranquilize the animal so the wires could be safely removed from its antlers.

Mathew Vargas, of the Oregon Department of Fish and Wildlife, told OregonLive the elk was easily one of the biggest he’s seen in person. Guessing it weighed somewhere between 700-800 pounds.

After getting the elk free from the wires, it was administered a second shot to counteract the tranquilizer and the elk was soon on its way again with no apparent injuries.

“It was a good team effort,” Vargas explained to OregonLive. “We always hope for incidents like this to go so smoothly. You couldn’t have asked for better.”

Here’s what the Oregon State Police wrote in the description of their Facebook video:

Yesterday, Troopers from Central Point responded to a residence near Butte Falls, where a call had come in of an bull Elk entangled in some wires. Upon arrival, it was clear that the bull elk had become stuck in a low hanging telephone line. The telephone line was attached to a power pole with live power lines. Pacific Power responded and disabled the power lines. Oregon Department of Fish and Wildlife also responded and tranquilized the elk allowing the cables to be removed. The elk was unharmed and later ran off into the woods.

What a magnificent creature.

If you’ve been keeping up with our news stories lately, perhaps you call the elk who has had a tire stuck around its neck for over a year now! These elk just can’t catch a break lately..

Vargas added it’s quite common for elk to get their antlers tangled in things, recalling a time he even saw one tangled in a volleyball net.

“It’s just in their nature to always be playing with things with their antlers,” he said. “They can’t help themselves.”