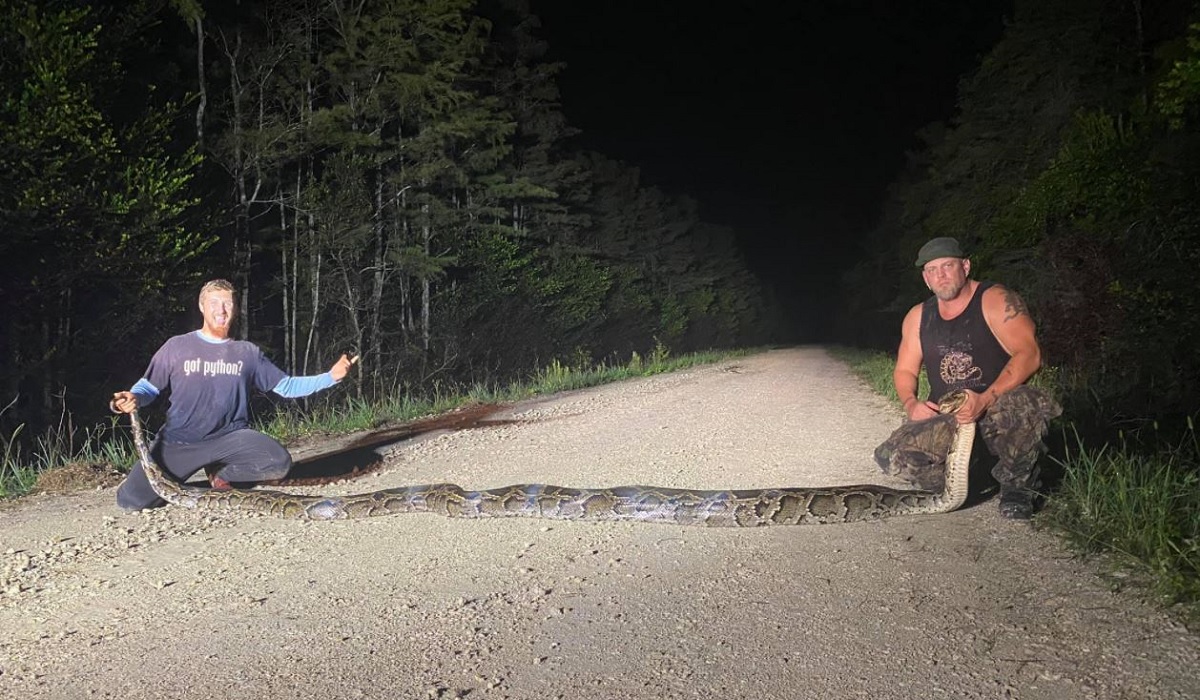 Well, it’s only by a hair, but Florida’s Burmese python state record has been broken once again after two Florida Python hunters hauled a “beast of a snake” out of the Everglades. The state’s previous record was 18.8 feet long.

According to CBS Miami, the two hunters were listed as Ryan Ausburn and Kevin “Snakeaholic” Pavlidis. The two men have had their fair share of experiences with this invasive species as Ryan is a contracted python hunter with the South Florida Water Management District, and Kevin, a contracted python hunter with the Florida Fish and Wildlife Commission – but his nickname pretty much sums it up.

The two reportedly wrangled the monster-sized snake on Friday, October 2 along the L-28 Tieback Canal about 35 miles west of Miami. The snake measured 18.9 feet long. Which is longer than the average sized great white shark!

The following day after catching the beast, Ryan wrote on Facebook:

“So, around 11pm last night, deep deep into the glades i spotted that always distinct pattern. On the back side of the tree line in the water. I knew she had some size but it wasnt until we walked to the waters edge did i realize how big. Usualy one of us would go for the head, but her head was a good 3-4 feet out in the water. Odds are id create ripples that would spook her long before gettin close to her. So i made the call to grab her by the tail, and secure her while @snakeaholic starts working for the head. As i grabbed her by the rear end and started pulling her she immediately turned back and anchored herself around a tree. It took every ounce of strength to keep her from slipping away while @snakeaholic was goin for her head. He quickly got control of the head and made the decission to hand her over to me. I then kept fighting to keep her from pulling her head loose while @snakeaholic kept her from wrapping me up. It may not look like it, but it was an absolute battle. And our awsome assistant @angelaamariie worked the camera, capturing this amazing catch.”

The snake received an official measurement on Thursday morning by the South Florida Water Management District which oversees the state’s python hunter program.

Over 5,000 invasive Burmese pythons have been captured and removed from Florida’s Everglades since the state began allowing hunters to legally pursue them in 2017. Burmese pythons were first discovered in the Everglades nearly two decades ago.

It’s believed they became established in Florida as a result of escaped or released pets and they are causing serious harm to the fragile Everglades ecosystem by eating native wildlife such as possum, rabbits, deer, bobcats, and other indigenous wildlife.

It is illegal to release nonnative species into the wild.

They are highly successful at reproducing in the vast swampy Everglades because they have zero predators. That, plus add the fact females can lay up to 100 eggs at a time. So it’s an uphill battle to say the least..

Which is why the state was forced to start the bounty program, in which registered hunters earn a minimum wage rate for up to 10 hours of work a day, plus a bonus for their catch: $50 for each python measuring up to four feet plus $25 more for each food measured above four feet. Hunters who catch a nesting female python earn an additional $200. Not a bad gig! You know, as long as you don’t mind tracking down gigantic constricting pythons in the middle of the dark..

To learn more about the FWC’s Python Action Team and the SFWMD’s Python Elimination Program, visit MyFWC.com/Python and SFWMD.gov/Python.