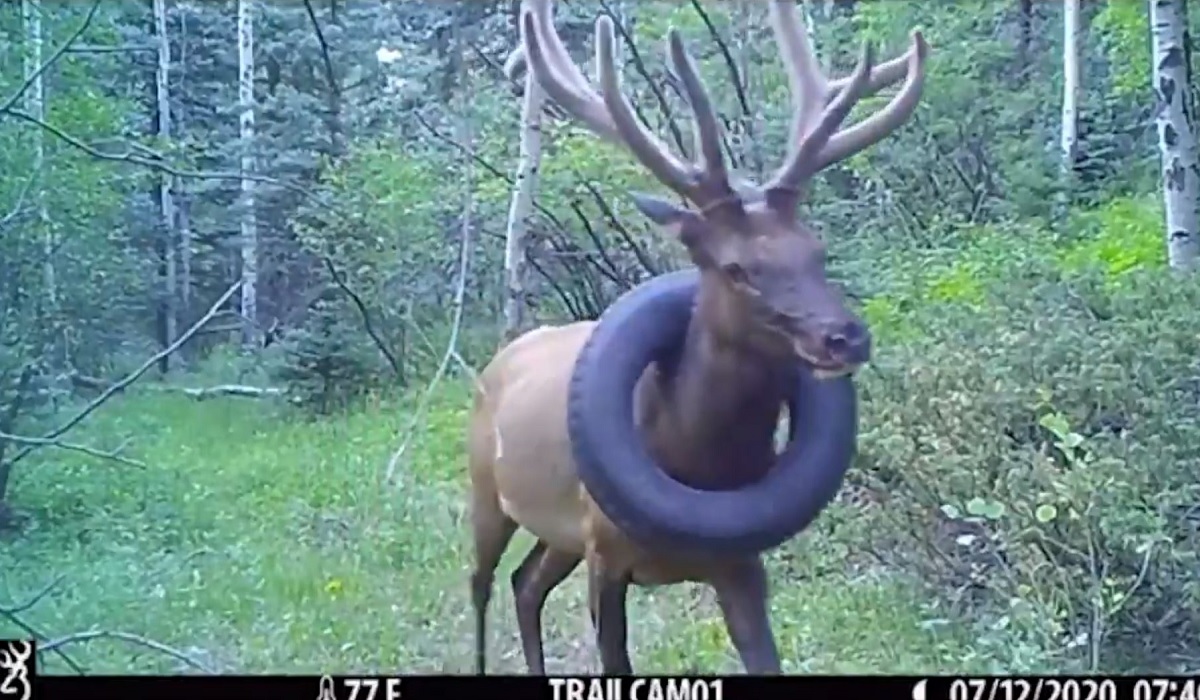 Colorado Parks and Wildlife officials are on the lookout for a bull elk that has had a tire stuck around its neck for more than a year.

If this story sounds familiar, you may have read the previous OutdoorHub article about the same bull that was captured on trail camera wandering around the Arapaho-Roosevelt National Forest. Rangers working with the park say the bull has been captured on trail camera seven times in the last 12 months, and are concerned the elk may not survive if they can’t remove the tire from its neck soon. And judging by the way his antlers have developed this year, it looks like he’ll likely be sporting that tire until he has another chance to shake it off when he sheds his antlers.

Let’s hope somebody can catch up with him before that!

“As he continues to grow, he is not going to have the room that he has now to eat freely, to breathe and drink,” Colorado Parks and Wildlife spokesperson Jason Clay said.

Unfortunately, those of us who spend a lot of time hunting, fishing or backpacking on public lands know all too well about this major problem we’re facing. People continue to leave their trash behind when they use these spaces, and it happens all over.

“We see it too often, whether it’s, you know, a hammock caught up in it, Christmas lighting, roping, tire around its neck. Unfortunately, it happens quite a bit here in Colorado,” Clay said.

The bull elk has been spotted around the town of Conifer, and CPW urges residents in the area to call right away if they happen to locate the animal. They do ask, however, that nobody try to attempt to remove the tire themselves. Although the animal may not appear to be distressed, there’s always a possibility it could react in a violent way given its situation.

Remember this poor bull elk with the tire around his neck? About one month later and he was detected once again on the #trailcam.

We would love to catch up with him and free him of that tire.

Remember this poor bull elk with the tire around his neck? About one month later and he was detected once again on the #trailcam.

We would love to catch up with him and free him of that tire.

Incredibly sad. Can we find out who dumped the tire and make them wear it for a month?. JK… but seriously…