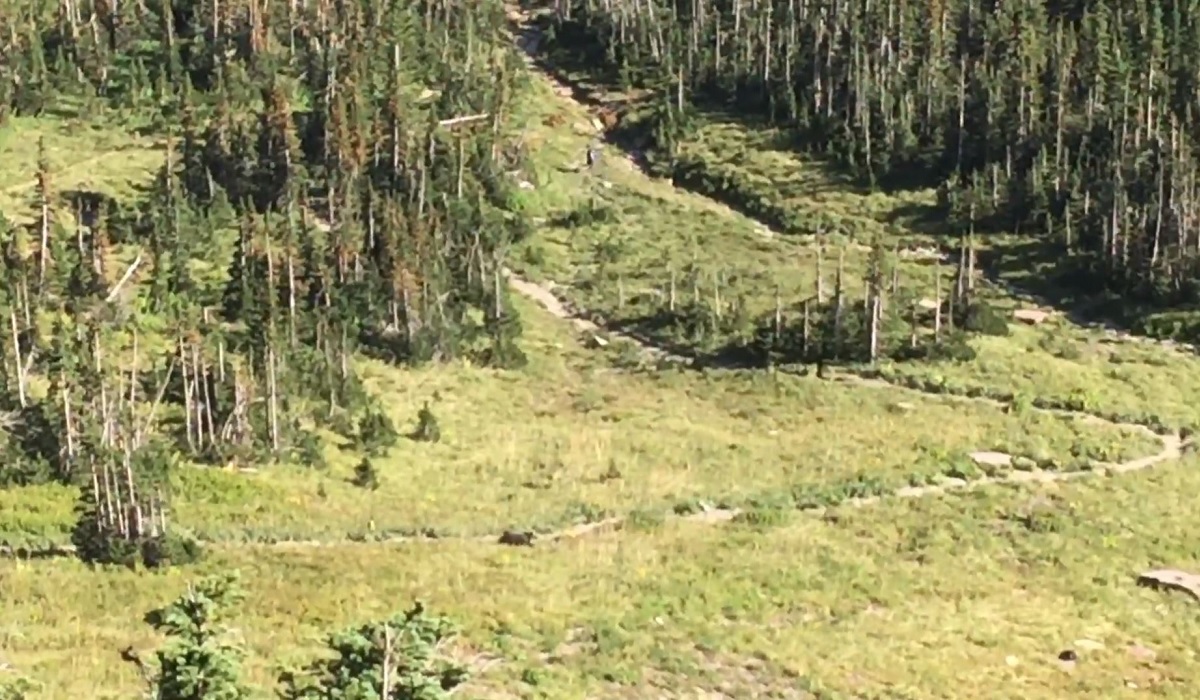 While hiking in Montana’s Glacier National Park, a pair of hikers witnessed a large grizzly bear charge another group of hikers, causing them to panic and run in the opposite direction despite the advice of experts.

The tense moment was captured by Dulé Krivdich, who posted the video to his Facebook page with a caption reading: “Be Bear Aware Folks.”

Krivdich and his wife – who can be heard in the video – were hiking back up after visiting Hidden Lake located in a secluded little corner of Montana’s Glacier National Park. The two reached a high point on the trail that provides a spectacular view of the trail and lake below, and that’s when they laid eyes on a 500+ pound grizz barreling down a trail below them. And to their horror, the bear was heading right towards a group of hikers who were oblivious of the bear’s presence.

The two started screaming as loud as they could to alert the hikers, but it almost backfired on them in a major way..

See, as soon as the hikers saw there was a bear heading in their direction, they turn and sprint back down the hill towards the lake. Luckily for them, though, the bear doesn’t appear very interested in getting in a foot race, and eventually moseys onward.

“We saw people booking it like we’ve never ever seen before in our lives. Even in the Olympics,” Krivdich said as he recalled the tense moment.

Krivdich also included the following in the caption of his video on Facebook:

“This was this afternoon hiking back up after visiting Hidden Lake. Just a switchback below where my wife and I just motored through, this big fella (I’d say a 500+ pound Grizzly came through a treeline, down a meadow and swiftly on to the trail itself to get to wherever he wanted to go. Now hikers just below on the same trail are totally unaware of what’s heading their way as we from above start yelling that there is a bear barreling down the same trail. As one yells back “what do we do?” “Just start making a lot of noise!!! Don’t run!!!! But just then, the grizz made a bluff charge and we saw people booking it like we’ve never ever seen before in our lives. Even in the Olympics. But I think that it was a case of the Bear not knowing people were coming up as the people had no idea but even once they did, they still did the worse thing…….they RAN!!! Thank goodness that it all went well afterwards. Other than that it was a beautiful day for a hike down to Hidden Lake.”

So let this serve as a reminder; If you’re in grizzly country and encounter a bear running towards you, running is the LAST thing you should do. Your instincts will certainly try to tell you otherwise, but running may trigger a predatory response and grizzly bears can easily run you down if they truly wanted, Montana Fish, Wildlife & Parks explains on its website.

Fortunately for these folks, the bear was probably confused when it saw multiple people take off running through the woods and opted not to go on pursuit.